Problems with Online Android Emulators and how to solve it?

Android now occupies the number one place in the world Smartphone arena with a market share of 87% at the end of 2016 that means 9 out of 10 Smartphones in the world run on Android. With such dominance in the space, the creation of mobile apps has reached never before heights. But the constant innovation that fuels this market has major problems in terms of the development and testing timelines. Running an online Android emulator, which used to be a solution once up a time, is not good enough anymore. So what can companies and developers do to stay ahead in the development race? What alternates exists to improve your app’s usability, performance and customer satisfaction? Let us explore.

With the explosion of Smartphones, customers’ screen size is reducing. People are moving from desktops and laptops to Smartphones for their everyday work and personal needs. This massive shift from big screens to a personal device has created a huge opportunity for developers to create tools that can help people with their work and their personal needs. Users can now view their spreadsheets and book movie tickets from their phones.

Apple’s Appstore and Android Play store has become the ‘go to’ place for people to discover apps that meet their requirements. The ratings left on those apps will decide how many people will install those apps. Customers have once again become the king of the market.

Days of unique apps are over. For your every need you will find at least two or more apps, giving you a choice. So if you want people to choose your app, install it, use and positively review it, your app needs to user-friendly, work on most handsets and be bug-free.

In the past, companies and developers determined a product lifecycle. They planned the updates, feature upgrades etc based on the resources and other factors. Today the scenario is changed. The Market dictates the timeline. If your app is incompatible with the latest OS, or not render properly, or suck a lot of battery juice, off it goes into oblivion to be replaced by a better app.

The fight for the screen space is constant.

You can win the fight only if you develop faster than others, test it better and offer a good user experience. That means developers will need to compress their development cycle and testers should speed up their testing while at the same time, maintain high usability and reliability of the app.

Android and iPhone both offer an easy to use platform for developers. iPhone has a few products (IP6, IP7, IP8 etc.) and versions (OS 8, OS9, OS10 etc). The permutation of devices and OS makes testing with real devices easier although buying that many Apple devices is quite an expensive investment. You don’t need an online emulator while testing for iPhone.

In contrast, Android has a highly fragmented market. Apart from different versions (KitKat, Jellybean etc), there are different forks of Android (Stock, Cyanogen, OxygenOS etc) and there are also different skins that manufacturers put on their devices (TouchWiz, Optimus, Sense etc). Real android device testing to cover all the combinations is close to impossible and quite expensive. 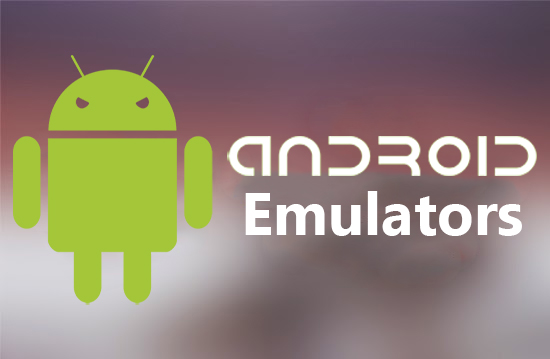 But as the market for apps grew, the demands on the app became even higher. Testing all the features of the app on an Online Android Emulators was not providing the full picture of the how the app would behave on a customer’s phone.

For example, a user installs a new app on the phone and the next day he notices the battery is getting low very fast. Looking at the battery usage, he discovers the culprit is the new app and bam! He hits uninstall. He then visits the Playstore and writes a negative review of the app’s battery-sucking problem. The next 20 people who see that review will not install the app.

These kinds of bugs cannot be easily identified using an online Android emulator. Apart from that, online emulators are slow because they have to replicate both software and the hardware components. thus slowing down the whole testing cycle.

Online Android Emulators also have other limitations that make them unsuitable for large-scale testing. There are a limited number of OS versions you can run on an Android emulator. Even on a good PC with HAXM acceleration support, you can run approximately 8 emulators at a time. Even if you manage to set up all the online emulators you need, one small problem can send the whole system crashing forcing you to start all over again.

So what can app developers do to speed up their product lifecycle while releasing a relatively bug-free app? Is there any alternative for Online Android Emulators? 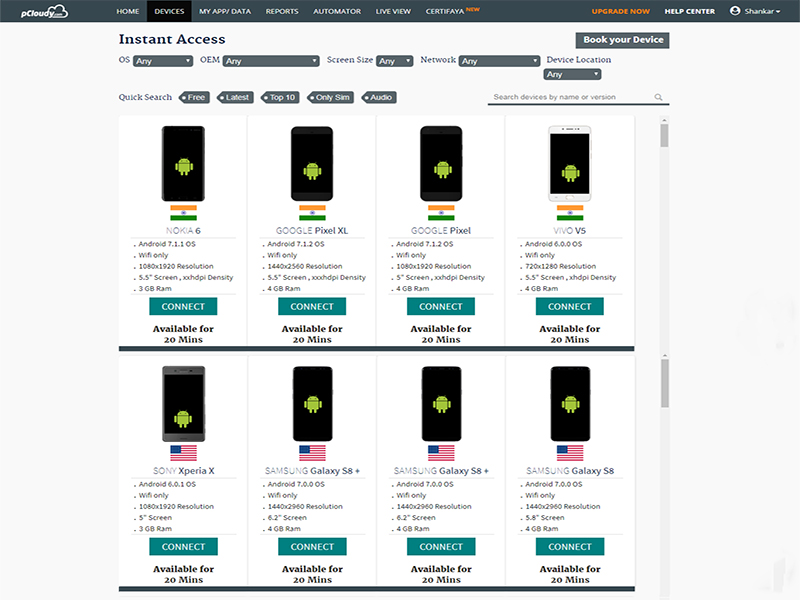 Testing on real devices has a few important benefits. Your testing can be in real conditions i.e. weather, location network accessibility, interruptions like SMS, calls etc can be tested accurately. You can also validate the screen brightness, visibility in different lighting conditions. Testing on a real device will be a lot faster than on an Android emulator.

The biggest problem in using actual android phones is the cost of buying all the phones you need to test. There are approximately 11k Android phone models in the market making it financially impossible to test on all available Android devices. This is one reason Online Android Emulators became famous in the initial stages.

You can run only one test at a time. If you have staff in another city or country, they cannot access the device. If you need to install an app, you have to do it manually on every device. Apart from that, there is also a question of logistics, maintaining the devices, updating them, etc all of which are time-consuming tasks.

One tactic used earlier involved a combination of using online android emulators during the early stages and a small selected list of real Android devices during the beta testing. While this would work for a localized team, it still does not optimize device usage and covers a tiny portion of devices while the fragmentation continues. Thus it is not an optimal solution.

Is there a third alternative that can beat the disadvantages of online android emulator and real devices testing?
In the recent times, a new mode of testing is gaining popularity among both amateurs as well professional developers. It is called mobile cloud testing.

What is Mobile cloud testing? 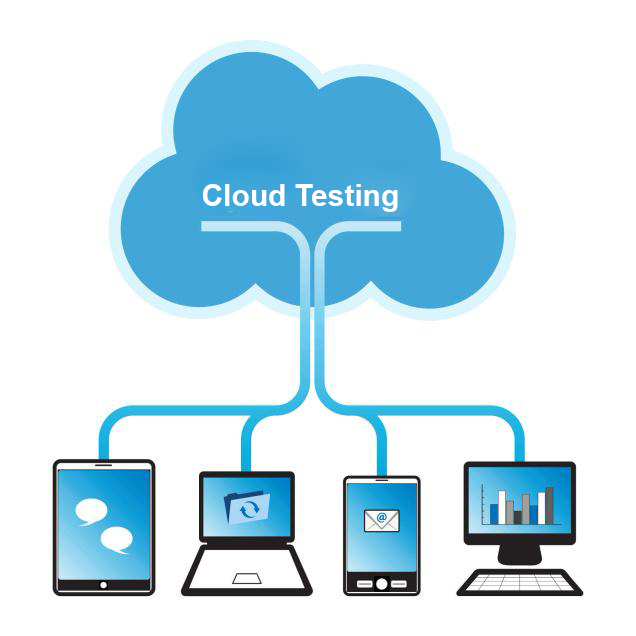 Testing on real devices using the cloud as the Interface is the new way of balancing the real android testing while making it economical and scalable. As a developer, you need not own any phones or buy expensive software. You connect to a lab that has a huge selection of Smartphones, select the ones you want to test on and start, it is that simple. You can run functional tests, automated tests, performance and other forms of tests easily. Since the interface is cloud-based, you can test from anywhere in the world, at any time.

There will be some changes in the way you set up your test, install an app, etc. All the testing though will happen on actual devices under user-level conditions. You can set the location, observe CPU utilization, battery drainage and pretty much anything else that you can do with a device in your hand. These are the things you can never test with an online Android emulator.

The best part is that you need not invest in any special infrastructure for such a facility. There are independent services providers who can allow you access to the device on a cost per use basis. You can even reserve devices in advance if you want to plan a battery of test over an extended period.

Opting for mobile cloud testing service gives you access to real devices at a fraction of a cost of setting up your own lab. There are no recurring charges as most of them use a ‘pay as you go’ model. You can spend all your time in testing rather than worry about the infrastructure, maintenance and other problems that come from the ‘owning’ model.

While there may not be a cost associated with getting Android emulators, they need a lot of expensive hardware to run a sufficient number of online android emulator. Mobile cloud testing does not have the problem.

One of the biggest benefits of testing mobiles over the cloud is that you are more likely to discover bugs that affect real-world customers than what an emulator can reveal. From a user satisfaction perspective, this is probably one of the biggest advantages mobile cloud testing has over online android emulator.

Most of the app development work has moved to the agile methodology which means testing will run almost parallel to development work. You will need a way to speed up the testing process to meet the sprint deadlines.

Using a mobile cloud, it is easy to streamline the testing process whether you are using a DevOps or an agile approach. Continuous testing is a lot easier to streamline over the cloud setup rather than via online Android emulators or even with real devices.

Many development teams are spread across the globe. Cloud setup gives them an easy way to test seamlessly from different geographies.

Different apps have different needs in terms of security. An Astrology app that gives general predictions may have little data security requirements while a banking app might need the testing to be done in a secure environment. Such clients can always go for a private cloud or even opt for on-premises setup. When you use a good solution provider, you can just hook up your existing devices to their setup and give access to your cross-border teams to test on the devices.

Testing performance issues, be it CPU load, battery discharge or performance over 2G, 3G and other networks work a lot easier when you use the mobile testing via the cloud platform. You can select which network mode you want to be on and apply the test. This kind of flexibility is difficult and sometimes, impossible using an android emulator.